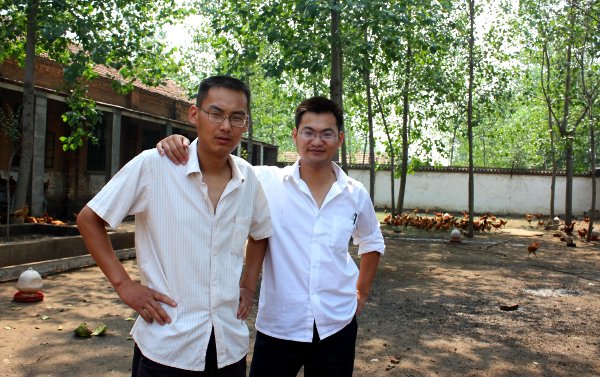 While many industries in the Chinese economy are booming, agricultural workers have been largely left behind, their fortunes dependent on the caprices of the weather and government subsidy policies. 36-year-old farmer Yang Zhiguang lives with his wife and two children in Jingtou village in Suqian, Jiangsu Province. In 2008, after hearing of growing market demand, they began raising grass-fed chickens. After two years of largely successful efforts, Yang was ready to embark a new business adventure. However, his business was trapped in a bottleneck.

I was impressed by how knowledgeable and professional OI China’s staff was. Originally, my friends and I thought that financial institutions were not approachable, but our experience with OI China completely changed our minds.

“Some of our community members had been lifted out from poverty by raising chickens in a much larger scale,” said Yuan, worried about his own business. “I didn’t have enough capital to expand my farm, so even if I did well, my earning potential was still quite limited.”

Constrained by a lack of working capital, OI China’s promotional activity gave Yang both hope and ideas. In March of 2010, an OI China loan officer traveled to Yuan’s village to conduct an information session about opportunities with OI China. When the OI China representatives addressed Yuan and his friends' questions and concerns to their satisfaction, they decided to keep in touch with the OI China staff members. “I was impressed by how knowledgeable and professional OI China’s staff was. Originally, my friends and I thought that financial institutions were not approachable, but our experience with OI China completely changed our minds.”

Having gotten a sizable understanding of OI China's products and policies, Yang quickly gathered his friends together and applied for a group loan. The next day, the group's loan officer visited Yang and his friends’ farms and conducted a detailed loan assessment. In addition to evaluating the group’s ability to pay back its loans, the loan officer also worked together with Yang to draft out both business and repayment plans. “Your loan officers really cared about our business and our difficulties”, said Yang. “With OI China’s market knowledge attentive door-to-door service, I was very confident my farm would grow with this loan.”

After attending business and financial management trainings provided without charge by OI China, Yang Zhiguang’s five-member trust group was granted a 100,000 RMB loan, with each household receiving 20,000 RMB. With an infusion of capital and unwavering dedication, Yang was able to purchase 2,000 more chicks and invest in the expansion and renovation of his farm facilities. 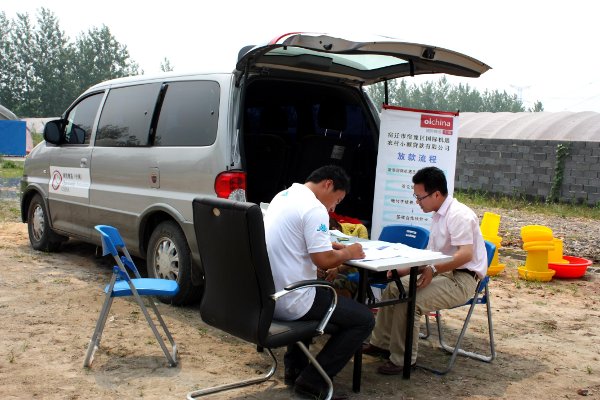 While the loan provided Yang with enough money to grow his business, his access to the market was strengthened by his trust group's cooperation. Another loan beneficiary, Zhou Wei, had four years of experience in raising chickens, and was very generous with both his advice and his belongings. With his OI China loan, Zhou was able to purchase a three-wheeled pick-up truck to transport his chickens to the bigger markets of Nanjing. Because the trust group members are financially beholden to each other, Zhou lets the other members borrow his truck. “We have been good friends for a long time, but now I feel like this trust group has brought us even closer,” said Yang, patting the shoulder of his partner Mr. Zhou.

After three months of hard work, Yuan sold his first group of 3,000 chickens. This has brought him a net income of 15,000 RMB, far more than he had previously been able to achieve. Because of the life cycles of chickens, OI China’s loan product guidelines stipulate that chicken farmers have a quarterly repayment pattern. On repayment day, Yang gathered his group members at his farm and they all got their money ready ahead of time. “Thanks to OI’s mobile bank service,” said Yang, “I don’t have to go into town to make my loan payments. With the time mobile banking has saved me, I can concentrate on purchasing my next group of chicks. This group is even larger than the last.”

When asked about his experience with OI, Yang responded with a double thumbs-up sign. “I am very satisfied with your service. The market this year is quite promising. My next steps are to rent more land and double my current operation size.”